The Cottingley Fairies...real or fake? 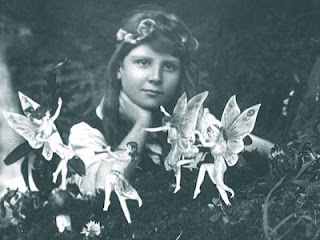 In 1917 two young girls took some photographs that would go on to captivate the world. Frances Griffiths and Elsie Wright, who lived in Cottingley, produced the most famous fairy pictures in Britain. But were the pictures real or fake?
Frances and Elsie lived in an area called Bingley where there was a strong belief in fairies-existing from local folklore passed down through the generations. Harry Speight author of 'Chronicles and Stories of Bingley and District', 1904, wrote that the fairies "looked like tiny white garments hung out on the trees". Frances and Elsie believed they had seen these fairies that Speight had described and so headed off with Elsie's father's quarter plate camera to capture stills of the fairies and prove they were real.
Frances and Elsie headed off with the camera and an hour later returned triumphant. Mr. Wright developed the plates and upon seeing the images declared the pictures of the fairies to be fakes and put them away in a drawer. Mrs. Wright, however, was adamant that the pictures were genuine. The girls were banned by Mr. Wright from using the camera again.

The pictures of the fairies were all but forgotten until 3 years later in 1920 when Mrs. Wright went to a folklore lecture in Bradford. Fairies were mentioned in the lecture and after Mrs. Wright had a conversation with a friend about fairies, mentioning the pictures. This exchange was overheard by a friend of Edward Gardner, a leading theosophist-Edward was informed of the pictures and he asked to see them.
Gardner got a leading photographer to examine the pictures for authenticity-the photographer, Harold Snelling, studied the pictures and declared them to be "entirely genuine unfaked photographs". Gardner asked Snelling to make lantern slides of the fairy pictures-these slides were shown at a lecture where they caught the attention of Sir Arthur Conan Doyle. Gardner and Conan Doyle joined forces on pursuing the intrigue and mystery behind the pictures and set up a meeting with Kodak in order for them to give a second opinion on the pictures authenticity. Once Gardner and Conan Doyle had Kodak authenticate the pictures they would take the story to the press.
Kodak examined the pictures and they declared that the pictures had not been tampered with but that it was impossible for fairies to exist and therefore fake-so an authenticity certificate was not issued. Despite this minor set back and after personally interviewing Mr. and Mrs. Wright and Elsie Wright, Gardner and Conan Doyle took the pictures to The Strand magazine in 1920. The article was entitled 'An Epoch Making Event-Fairies Photographed' and the publication was sold out within a matter of days. It was the start of a phenomenon that would last for over sixty years. 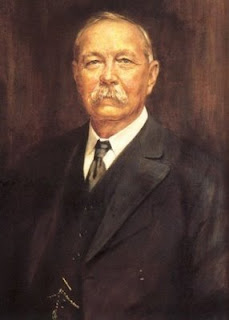 Sir Arthur Conan Doyle, author of the Sherlock Holmes books, was utterly convinced by the photographs-he even published a book called 'The Coming of the fairies' that detailed the whole fairy picture affair.
Many people were certainly taken in by the pictures, especially the fifth picture of the fairies (below) that does seem to have an air of realistic charm about it. But Fairies? Could they possibly be real? 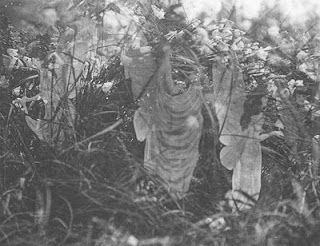 It seems not. In 1981 when being interviewed yet again about the fairies, Frances and Elsie declared the pictures to be fakes. They both said that they had held up cut-out fairies with hatpins to capture the pictures that would go on to fool the world. Despite this eventual revelation Frances Griffiths continued to maintain that they had seen the fairies and that the fifth picture was the one picture that was in fact real. Since Frances and Elsie have been dead many experts have looked into the Cottingley Fairy mystery and most have declared it to have been a hoax by the girls.
I am quite a big fan of fairies and would love to think that fairies were real-but alas I have never seen one! Perhaps if I go to Yorkshire myself, to the place where Frances and Elsie 'saw' their fairies I might see one?
Posted by TammiMagee at 08:16

oh great post! I remember seeing those photos - was there a movie that came out about them?
happy new year!
Lauren

Thanks You Lauren! I think there was a movie about it years ago-I think called Fairy Story? but I'm not too sure that is the correct title. Thanks for reading! Happy New Year to you too!

There is a great novel based on the Cottingsley Fairies called "Photographing Fairies.

Yes, there is a movie. It was actually on tv earlier! Which has me online researching fairies. lol! It's called: FairyTale: A True Story. ~ Best Wishes, Trina

Lovely! I love fairies. these girls clearly inspired me. Thank You for posting, I was looking for a blog on this!