Whenever we think about Tommies in the trenches of the First World War, we think about mud, trench foot and a questionable diet.  Is it true that Tommies survived on rock hard biscuits and the occasional rat to satisfy their ever-increasing hunger?  Or was their diet a little better than what we think? I have been looking into this recently in anticipation of launching an 'Eat like a Tommy' day at the school I teach at in Walsall, Staffordshire. 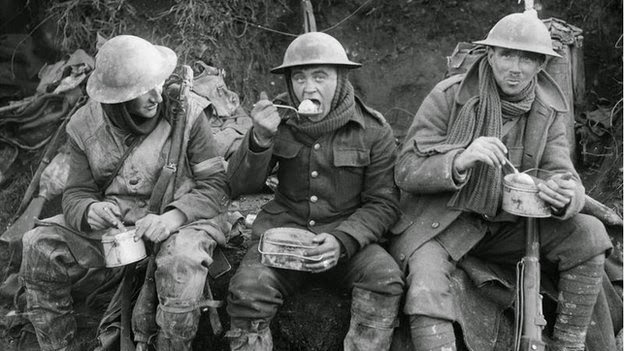 Baldrick from Ben Elton's 'Blackadder' memorably described the best food available to the men in the trenches as 'rat-au-van'.  But despite popular belief the average British soldier's diet at the Front was nutritious and plentiful, even if it was perhaps a little repetitive.  Dishes like chips and egg and curry were popularised during the conflict and soldiers could chow done on things like potato pie and mutton broth.
Food available to the men fighting in France and Belgium was very often far superior and in greater quantity than what was available at home.  For example, "a working class family of two adults and at least one child in Britain would eat 3lb 6oz of beef or mutton a week, along with 19lb 8oz of bread and just over 25lb of potatoes between them, each soldier would receive 8lb 12oz and the same weight in bread. He also had 1lb 5oz of bacon and 3lb 8oz of vegetables" Source
As the war went on more and more food was prepared closer to the front lines to cater for the increase in soldiers serving on the Western front.  As thousands of soldiers from India joined the ranks of the British Army curry was prepared and became more widely available to soldiers.  Of course, the usual dishes still reigned supreme-like 'bully' beef and 'Maconochie' and not everyone was a fan of these trench staples.  One soldier regarded 'Maconochie' as a 'war crime' whilst the French referred to 'bully' as 'monkey'.  But, as soldiers were paid in local currency they were able to supplement their rations with local food bought from cafes and restaurants.
As for rats being trapped, roasted and eaten in desperation because the only alternative was rock hard biscuits-it looks like it could be more of a myth than a reality....
Great Wyrley High School in Walsall, Staffordshire are hosting their 'Eat like a Tommy' day on 27th June 2014.  On the menu will be delights such as; beef tea, curried cod, fish pie, potato pie and milk biscuit pudding.
Posted by TammiMagee at 13:12 4 comments: