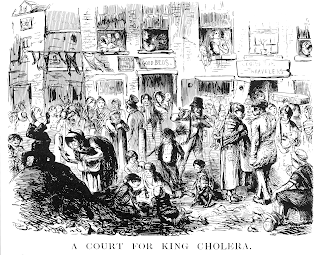 There is no mistaking the fact that London was a very dirty place in the 19th century-filth and rubbish was everywhere! The above cartoon, aptly called 'A Court for King Cholera', published in Punch magazine in 1852 outlines just some of the horrid conditions experienced by people in the 1800s.
Conditions were so bad at this point due to rapid population growth as a result of industrialisation. Growth was so quick that towns could not cope with the need to house people and provide them with water and facilities to remove their sewage. In these conditions, nasty and devastating diseases spread very quickly.
The first case of widespread cholera hit Britain in 1831-it was a 'shock disease' that killed quickly. Sufferers would have to endure sudden and prolonged bouts of diarrhoea and vomiting-death as a result of cholera was swift, painful and unpleasant. It was because of these dreadful symptoms that cholera was the most feared disease during this time.
Of course at this time people did not understand that germs caused cholera, as Pasteur's Germ Theory was not published until 1861. People had all sorts of explanations for disease-punishment from God, Miasma or 'bad air', and the movement of the planets. 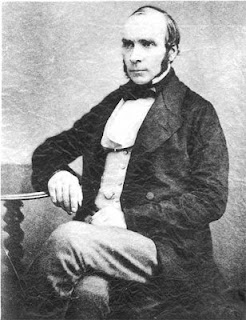 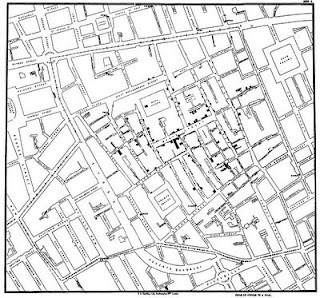 Within 10 days of the cholera outbreak around Broad Street in London, 500 people had died of the disease. Snow's research led him to discover that all of these deaths occurred within 250 yards of the water pump on Broad Street. Snow started to investigate the surrounding area of the pump and what he found led him to request that the council disable the Broad Street pump-once this was done no more deaths occurred in that same area.
Snow had found a link between the people who were getting their drinking water from the Broad Street pump and the people dying from cholera-it was mostly people using this pump that were falling victim to the terrible disease.
Cholera is spread by infected water and it was later discovered that a cesspool, one metre away from the pump, had a cracked lining allowing the contents to seep into the drinking water.
Unfortunately, John Snow, who was one of the more forward thinking surgeons of his time being one of the first to champion the use of chloroform, didn't live to see why his theory about cholera being linked to water was correct. Snow died in 1858 as the result of a stroke, three years before germs were discovered.
Posted by TammiMagee at 11:50

Yet more evidence for the importance of Geography and maps!! ;-)

Such interesting information! I'm so glad I found your blog. I'm definitely adding it to my blogroll. I have an historical fact and fiction blog where I discuss historical facts, tid-bits, book reviews and lots of other interesting things. Please come and visit. I'd love you to follow- we can link eachother.

Thank you so Ms. Lucy-I will definitely add your blog to my blogroll too. Thanks for getting in touch-it's always nice to hear from a fellow history enthusiast! Keep reading!

At least London is better now.

Such a happy place. you have a wonderful blog and an excellent article!! I, thanks for sharing the information.

I want every herpes patient to please read my testimony, my name is SARAH MORGAN and I am from California in the USA, I contracted genital herpes from my ex boyfriend who never had any symptoms. I have had it for 4 months now., and it has affected my life. I have told my boyfriends who I trusted about it and I have never had a bad reaction, it has affected my new relationships with Smith and people think herpes is really a minor skin irritation herpes has a long term effects on health. The stigma attached to this virus by ignorant people is ridiculous. Most people have herpes in one form or another. I would like to advise people on how I get rid of my herpes and I was reading a comment on the internet,and I saw a testimony posted by a woman from Germany that she get rid of her herpes with the help of DR AHKIGBE and so I was so happy when I saw that post, that his herbal medication is free and I quickly collected the herbal doctor email and I email him within 3 hr he respond to my email and I explain things to him he told me not to worry that he is going to cure me totally with his herbal medicine he only request for little money that he will use to buy the items for the preparation of the herbal medicine, wish I send to him because the pain was too much for me to bear and after some days he told me that he has prepare the herbal medicine, that I should send him my address that he want to sent it to me via DHL or FED-EX that was how I got the herbal medication and I use it as I was told and after few days I found out that my herpes was no more, i went to hospital for confirmation and it was true really that was how i got my cured. DR AKHIGBE also cure other deadly diseases like,  HIV/AIDS, HERPES, DIABETES,CANCER, ALS, ASTHMA, MENINGITIS ,LUPUS, EPILEPSY, CHRONIC DISEASE HEART DISEASE., JOINT PAIN, STOMACH PAIN, SCHIZOPHRENIA, POLIO,MULTIPLES SCLEROSIS, TUBERCULOSIS, ALZHEIMER ,PARKINSON'S, to get your rid kindly via his email:   drrealakhigbe@gmail.com    contact his number:  +2348025012866           website:  https://drrealakhigbe.weebly.com       you can still write me on Instagram to get more information.