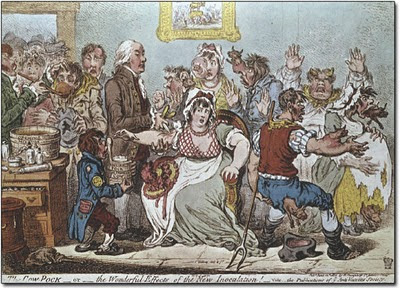 During the 1700s smallpox killed more children than any other disease and survivors were often left severely disfigured by scars from scabs that formed on the skin. The method of inoculation was used in China and other parts of Asia and Africa to stop people catching the deadly disease. This involved spreading pus from a smallpox pustule into a cut on the skin of a healthy person. If the person was lucky they got a mild dose of smallpox and did not catch it again as their body had developed antibodies against smallpox-although they would not have known this in the 1700s. If the person was unlucky they would develop a bad case of smallpox and die.
Lady Mary Wortley Montagu watched inoculation carried out in Turkey where her husband was the British Ambassador. During a smallpox epidemic in England she had her daughter inoculated in front of important doctors and the method rapidly became popular. Inoculation became big business-Robert and Daniel Sutton became very wealthy by carrying out many thousands of inoculations, charging up to £20 per patient (clearly only a procedure the very wealthy could afford). However, there were dangers with inoculation:
The person inoculated could get a strong dose of smallpox and die.
The person inoculated could pass smallpox onto someone else.
Most people could not afford inoculation so were not protected.
Some people thought that the milder disease of cowpox seemed to give protection against smallpox so deliberately infected themselves with cowpox. However, no doctors had written about or tested this idea scientifically.

Edward Jenner was born in 1749 and was a surgeon's apprentice at the age of 13. When Jenner was 21 he studied with John Hunter in London, the greatest surgeon of the time. In 1772 Jenner began working in Berkeley, Gloucestershire as a country doctor but kept in touch with Hunter about medical developments.
Jenner learned a lot from Hunter, who told his students to observe patients carefully and experiment to test their ideas. Jenner's discovery of vaccination followed Hunter's advice exactly. Jenner had long known the story that milkmaids who caught cowpox never seemed to get smallpox and he kept this idea in his mind, thinking about how to test it.
In the 1790s Jenner carried out experiments to test the theory, observing and recording all the details carefully. Then in 1798 he published his book describing vaccination and presenting his evidence, describing 23 different cases. He called this method vaccination because the Latin word for cow is vacca.
One of Jenner's famous experiments involved a dairy maid by the name of Sarah Nelmes and an 8 year old boy called James Phipps. Sarah Nelmes was infected with cowpox and was suffering from the usual symptoms that included a large sore. Jenner chose to infect James Phipps with matter from the cowpox sore on the hand of Sarah Nelmes. Jenner made two cuts on the boy and inserted the matter. Seven days later the boy complained of uneasiness, 2 days after that he became chilly, lost his appetite, had a slight headache and spent the night with some degree of restlessness but on the following day he was fine.  To make sure that his idea had worked, Jenner inoculated James Phipps with smallpox matter but no disease followed. Jenner repeated this several months later and still no disease followed.
Jenner's work went down very well in America-by 1803 vaccination was being used in the USA-and, in 1805 Napoleon had the whole of the French army vaccinated. However, vaccination was not made compulsory in Britain until 1852, which Jenner didn't even live to see as he died in 1823. The problem was that in Britain there was a lot of opposition to vaccination and for many reasons. A lot of people were very religious and thought vaccination was against God's laws as it was unnatural to give people animal diseases. Coupled with this religious people thought smallpox was a punishment from God for sin, therefore the only cure was to pray to God for forgiveness. The men who had been making a mint inoculating people did not support vaccination as they feared it would cost them their jobs. The Royal Society didn't support vaccination as they saw it as too revolutionary, so they refused to publish Jenner's book. The general attitudes of the time also hindered the progress of widespread support for vaccination too-most people were unwilling to believe Jenner as firstly, they had no idea who he was and secondly, Jenner couldn't explain exactly why vaccination worked (as germs had not yet been discovered). Many people just didn't have the time or inclination to get vaccinated or have their children vaccinated-they either didn't trust the method; they saw it as too rushed and clumsy or, they had more important things to worry about, like finding work and food. The government's laissez faire attitude also meant that people were not forced to get vaccinated as the government felt that it didn't have the right to interfere in people's lives.
An Anti-Vaccine league was formed in 1866, the result of people's fears about vaccination. It didn't help that some people still caught smallpox even after they'd been vaccinated. Nor did it help that doctors performing vaccinations were not always as meticulous as Jenner had been-one doctor vaccinated patients in the same room as he inoculated others with smallpox. It was easy to get the diseases mixed up, and as a result patients often died.
In the long term, Jenner's work on vaccination led to smallpox being declared eradicated from the world in 1980. And, once germs were discovered in 1861, led to other vaccinations being discovered.
Posted by TammiMagee at 11:39 4 comments: