This is my 100th Post! I can hardly believe it! I have called this post History and Me as I intend to write about my recent historical experiences, which I had during my holiday in Dorset. 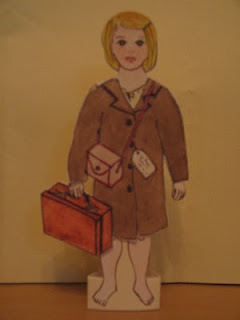 I want to start with an excellent little find I made in a quaint shop dedicated to the works of Enid Blyton called The Ginger Pop Shop. The shop itself has many fine gifts and amongst all the Enid Blyton books and memorabilia I discovered one of the cutest things I have seen in a long time-a little paper evacuee doll!  The doll came with little paper clothes, identity card and a gas mask! The pack the doll came in also contained a story of the evacuee doll that highlights the trauma evacuated children suffered as a result of being uprooted from their homes. As soon as I saw the doll I immediately thought of a good way to use it in a lesson with my Year 9 groups! Excellent!
My visit to Wareham in Dorset also gave me the opportunity to use my much beloved National Trust membership (thanks to the guys at Swanwick for that marvelous gift). As soon as we drove into Corfe we saw this wonderful ruined castle-so big that it is literally all you can focus on for miles! Corfe Castle stands between the Purbeck hills, an ideal position when the castle was built to defend inland Dorset from attacks from the sea. The castle itself was built by William the Conqueror soon after his arrival in 1066. The castle was a favourite haunt of King John (1167-1216) who made vast improvements to its defences between 1199 and 1216. 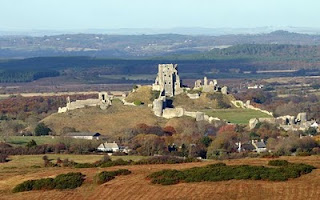 When I was walking around the ruined castle I couldn't help but question my own fitness as I was out of breath pretty much straight away! It was built on a very steep hill-for obvious defence reasons I know-but it was a challenge to get around the site! I climbed to the highest point you can get to safely and stood at the top for quite a while-mainly because I could make out the figure of my Dad down in the centre of the town and was waving frantically to him, but he didn't look up. I was in awe of the vistas from such a height and what I found even more intriguing was how you could make out the stages the castle would have been built in. When the Normans first came to England they built wooden Motte and Bailey castles for speed and because the raw materials were all around-a bit like Medieval flat pack castles-of course none of the wooden structure of Corfe still exists, for obvious reasons. The next stage would have been a stone keep castle, the keep still remains, partly destroyed, at Corfe. Then followed the concentric outer wall, which acted as an extra defence-a lot of this still exists at the site in a partly ruined state and can clearly be seen in the above picture. Below is an artists impression of what Corfe Castle would have looked like in 1643.
Let me know about your recent historical experiences-would love to hear about them! 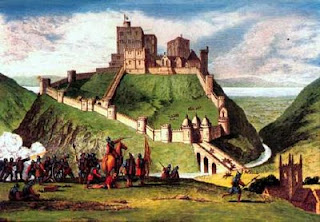 Congratulations! Here is the twitter link you asked me about http://www.backtype.com/widgets/tweetcount

Congrats on your 100th Post and have enjoyed getting to known your blog and reading some of your posts just now. Some day I'd like to visit the UK and see all the grand historical sites...there are so many! I've lived in Italy but did not get out and around Europe enough in the two years that I was there...but someday!

Thank you so much Roberta! Hope you get to visit!