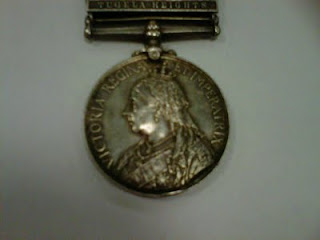 I am sure I have mentioned before that I teach the Experience of Warfare in Britain, 1854-1929 to Year 12 students at my school, Great Wyrley High School.  A few weeks ago one of my year 12 students surprised me with a genuine Boer War medal that his great-grandfather had received for service in the war.  James (the student in question) was under strict guidance to have the medal back in his Dad's possession within the hour, so I had it long enough to get a few snaps of it. Above is a picture of the aforementioned medal-adorned with the image of Queen Victoria. Above the medal are 6 bars, each stamped with different battles of the war that James' great-grandfather took part in, including the relief of Ladysmith.
But the thing that excited me more than the medal was the accompanying letter that James brought along, written by his great-grandfather Patrick Traynor. Although the original letter was not sent due to its delicacy, James' Dad did type the letter up so that I could read what Patrick had written to his wife Florence and, I must say, it makes for insightful reading.
The letter is dated March 4 1900 and was written at Ladysmith:

Dear Florrie,
Just a few lines to let you know that Ned and I are quite safe after 7 weeks hard fighting and that Ladysmith is relieved.  We have been having it very hard, what with marching and fighting in the sun and lying on the grass and on rock at night without any cover over us, and the nights are fearful cold and dewey [sic].  I have not had my pants off since we left the ship and my boots and socks are growing to my feet. There is not a man here that is not swarming with vermin and no matter what we do we can not keep them away. We have been in 4 different engagements and the regiment came out very lucky out of them. In the final one on 27th Feb last we had Colonel McCarthy O'Leary, Sgt Wheatley and 3 ptes killed and I don't know how (bottom of page missing)....Ladysmith yesterday.  The troops that occupied it are very clean but have been on very short rations and have eaten very near all their horses. It is no use moaning about anything done out here but our Regt fairly went into it at the last fight, fixed bayonets and charged the trenches, our Coy [Company?] was the first and I believe (bottom of page missing)...60 of them.  Sniping was kept up during the night but when morning came there was not a Boer to be seen nor a shot to be heard, they had all skedaddled [left]. I do not know where we will pick up with them again. It is reported that we [will] remain here for some time but I do not know for certain.  Will have plenty news for you when I get home, can tell you better than writing.
I had a letter from Mr Snowdon on Friday.
No more at present, from your loving husband P Traynor.
Kisses for Dollie, Nellie and yourself, best love to all at home.
Good night and God Bless you xxxxxxxxxxxxx

Let me know what you thought when you read the letter
Posted by TammiMagee at 11:03 1 comment: