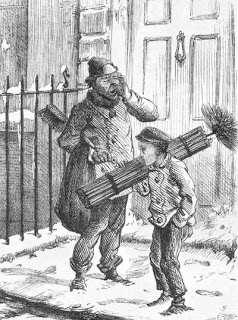 In Victorian Britain if you came from a poor family, when you reached a certain age you wouldn't go to school instead you would start work in order to help support the family. Poor children would start hard physical work from as early as aged 5! Many of the jobs children did at this time were unpleasant and often were rather dangerous.
Some children worked in coal mines pushing heavy trucks of coal to the surface. They did all of their work in the dark with only the light of a candle to help them see. Some children were employed by mine owners to hold shaft doors open to let air in and to clear the way for children coming with trucks of coal. 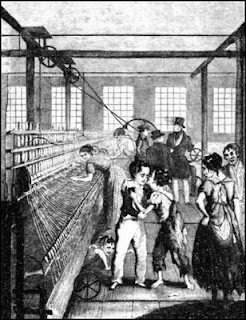 Other children worked in factories where they were employed to piece cotton together and fix machinery-as they were small enough to get in between the moving parts. Many children fell ill as a result of working in cotton mills or had bad accidents, which left them with injuries.
Most factory owners and mine owners did not think anything was wrong with giving nasty jobs to children as there were no laws against it. Children were forced to work long hours with very little pay.
Children in the country also worked; they did jobs like picking up stones before the crops were sown or scaring birds away from the crops. Jobs in the country were just as hard as jobs in towns and cities but also involved working in cold and wet conditions.
Children were employed as cheap labour and could not complain, as there were no laws protecting them, and if they did the consequences could be severe: they could be beaten by the Overseers or even lose their job!
Some orphans and homeless children were sold to employers. A lot of small and thin boys were used as chimney sweeps-as they could fit up the narrow chimney shafts. These boys would clean the chimneys in rich people's homes-probably wondering why he was squeezing through a dirty chimney while rich children could go to school and had nice toys. Being a chimney sweep was quite a dangerous job-it was often done with no shoes on so the boys feet would be sore and bleeding. Chimney sweeps were fed very little as they had to stay lithe to be able to fit up the chimney stack-this meant they were hungry most of the time and therefore rather weak. If the chimney sweeper's master thought the sweep was taking too long he would thrust a long stick up the chimney in order to hurry the sweep up, or even worse he would light the fire at the bottom so that the sweep had no choice but to hurry up the flue. 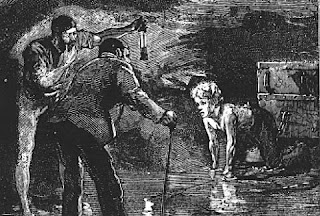 In 1833 the first Factory Act was passed thanks to the successful campaigning of Lord Shaftesbury, who had gathered evidence from working children to condemn the condition they worked in. The act made it illegal to employ children as workers under the age of 9, children between 9 and 13 could work no more than 9 hours a day, children from 13 to 18 could work no more than 12 hours a day and all employed children had to have at least 2 hours of schooling a day. Conditions didn't change for working children overnight and many factory and mine owners ignored the legislation, but at least it was the start of change for children, albeit the start of a slow change.
So, next time your parents ask for a cuppa-don't moan, just think of how lucky you actually are!
Posted by TammiMagee at 08:21

Great post! Ever watch the show - Worst Jobs in History? The host is hillarious. He tried to get up a chimney to show how heinous the job was for young boys. I have the Worst Jobs book too and I highly recommend it. The Victorian age was a bad time to be a poor kid. Happy Holidays!

Thanks a lot Bearded Lady-i'll look into that prog and book! Thanks!

Thanks Helped me alot more please :)

thanks a lot from italy!