Sophie Scholl has been someone who I have admired for quite a while-ever since I saw the amazing 2003 Marc Rothemund film about her. The film is great and I highly recommend it to everybody! My year 9 students will watch elements of the film when we study the Second World War.
Sophie Scholl was only a young girl when Adolf Hitler came to power in Germany in 1933. Over the years Sophie witnessed the Nazi atrocities that were taking place in Germany and, after joining the BDM (which opened Sophie's eyes to what Nazism was) and becoming influenced by her father's dissenting views, she became a firm objector to Nazism.
In 1942 Sophie enrolled at Munich University to study biology and philosophy. Sophie's brother, Hans, also studied at the university and introduced Sophie to his friends. Sophie, Hans and their friends were keen lovers of art, music, literature, philosophy and theology-interests that led them to question the authority of the Nazi regime and the suppressing nature Nazi policies. The group of friends secretly discussed politics together and formed the anti-Nazi youth organisation called the 'White Rose'.
In 1942 the White Rose started to publish leaflets anonymously that called for Germans to passively resist the Nazi regime. Sophie did not take part in writing the leaflets but, after discovering what her brother and his friends were doing, insisted on helping distribute the leaflets. This was handy for the White Rose because with Sophie being female it meant she was less likely to be stopped and searched by the SS. 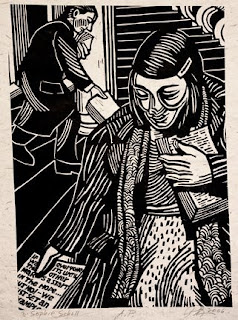 On 18th February 1943, Sophie took part in the distribution of the sixth leaflet that the White Rose produced. The plan was simple; Sophie and Hans would go into Munich University while morning lectures were still on to distribute the leaflets. Sophie would carry the suitcase containing the leaflets and, if asked about why she had the case, would say that she had it because she was taking laundry to her Mother in Ulm. As for the reason Sophie was at the university before leaving for Ulm, she would say that she had a lunch date with a friend before her train to Ulm was due. Sophie and Hans would put out all the leaflets and would be undiscovered. The resulting influx of students from the lecture halls into the corridors where Sophie and Hans would leave the leaflets would mean that all the leaflets would be picked up. This plan almost worked for Sophie and Hans-just before they were about to leave, after believing they had distributed all the leaflets they had in the case, Sophie noticed that there were more. Not wanting to waste them, as paper was expensive during wartime, Sophie and Hans would continue putting out the leaflets. As the bell went to signal the end of morning lectures, Sophie, without thinking, pushed a stack of leaflets off a balcony. This one careless act was witnessed by a custodian who was, or at least pretended to be, a Nazi through and through. The custodian reported Sophie and Hans to the university and both were quickly arrested.
The clip below from the film 'Sophie Scholl' shows Sophie and Hans distributing the sixth leaflet.

During Sophie's trial she was very outspoken about her actions and her abhorrence of the Nazi regime right to the end, even when the judge, the dreaded Roland Freisler, sentenced Sophie to death for treason. Sophie's bravery has earned her a lot of respect and admiration-she has become a key figure in German history because of her actions.
Instead of receiving the usual 100 days in prison, given to prisoners who had been sentenced to death before the sentence was carried out-Sophie, Hans and Christoph Probst-another member of the White Rose, were killed the very same day of their sentencing. At 17:00 Sophie was led away to the guillotine that would cut her life short-it has been recorded that her last words before her execution were: "How can we expect righteousness to prevail when there is hardly anyone willing to give himself up individually to a righteous cause. Such a fine, sunny day, and I have to go. But what does my death matter, if through us thousands of people are awakened and stirred to action?".
Sophie was a brave, intelligent, awe-inspiring young woman who was willing, along with her White Rose counterparts, to stand up for what was right and to speak out against a regime of hate. For this, Sophie has been honoured in many ways by Germany-and rightly so.

Let me know what you make of Sophie Scholl and the White Rose.
Posted by TammiMagee at 11:59

Thanks for this post, I've been interested in Sophie ever since I read a play calld The White Rose. I think that more people should know about her.

definitely! Thanks for reading Elizabeth.

Sophie Scholl should be an icon. I have been trawling the internet and can't find any posters of her anywhere (except for from letzen tag), it's really disappointing. Thanks for the post though! My books all breeze over the topic, and naturally (sharing a name) I took an interest.