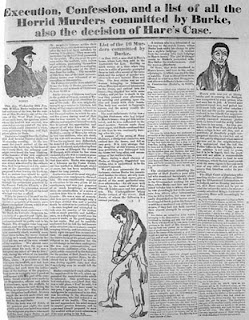 It's January 1829 and on the Lawnmarket an infamous criminal is about to be put to death-people are clambering to see this historic event. Even Sir Walter Scott has a 'window seat' for the execution. The hanging of William Burke is the culmination of a trial that was dubbed the 'trial of the decade' in a recent documentary. It was the case of the accused William Burke, who was on trial for the murder of Mrs. Docherty, whose body Burke sold to one Dr. Knox. But this story isn't just about one death, it is believed that Mrs. Docherty was victim number 17 in a string of murders, committed by not just Burke but William Hare too.

In the 1820s, Edinburgh was leading the way in the field of medical science, and in order to continue this trend it is believed that the medical schools needed 520 bodies a year in order to teach anatomy. The only legal way to obtain cadavers was through taking the bodies of executed convicts. This was socially accepted because people thought that criminals did not have the right to a Christian burial-but this did not garner enough corpses for the schools. Anatomists were willing to pay large sums for cadavers; between £7 and £10 per corpse. This led to a lucrative trade in body snatching-Resurrectionists, as the grave robbers were known, provided many of the cadavers needed to the medical schools and quite a few pickled specimens found their way from Ireland to Edinburgh every year. But Burke and Hare were no Resurrectionists-what they were doing was far more sinister.

Edinburgh in the 1820s was a city divided-it had just gone through a phase of growth and regeneration, but in 1826 the boom went bust and the divide between the rich and the poor was even more extreme. Many of the working class lost their jobs and things went from bad to worse.
Margaret Laird arrived in Edinburgh in the 1820s and found a bustling environment-full of opportunity but with the bust of 1826, this opportunity very quickly diminished.  Like many women in similar situations the only option was prostitution. It was through prostitution that Margaret seized her opportunities when she could-marrying a succession of men, almost bettering herself every time. Margaret ended up marrying the owner of a lodging house called Logue, who was fairly old compared to herself. It is believed that Margaret met William Hare at this lodging house. William Hare was an Irish immigrant who had been working on the canal as a navvy. Shortly after moving into Logue's lodge house, Hare and Logue had an argument and Hare left the lodge house. Logue mysteriously turned up dead not long after, and Hare quickly moved in with and married Margaret.
William Burke was also an Irish immigrant who emigrated to Scotland in 1817. There he had had many different jobs, but at the time of meeting Margaret Hare, Burke was a cobbler. Burke and his wife, Helen McDougal, were invited by Margaret to stay at her lodge house. It is then that these string of murders started. It is believed that the first body Burke and Hare sold was not the result of a murder, but rather the result of a fellow lodger dying. Burke and Hare sold the body as the old war pensioner, called Donald had no family and so no one to bury him. The man they sold the body to was the enigmatic Dr.Knox-a lecturer of anatomy at the medical school. Knox made it clear to Burke and Hare that he would always be willing to buy bodies in the future.
The first murder took place about a month later, the result of fear. It was clear that one of the lodgers was dying in his room-the man was probably dying of the plague. If the plague had been discovered at the lodge house then it would have been closed down by the authorities. Remembering what Knox had told the two men, acting quickly Burke and Hare finished the dying man off and promptly took his body to Knox. Burke and Hare's murderous career had begun. How Burke and Hare went on to kill their victims is still known as 'burking' today-the method was Hare would hold his hand over the victim's nose and mouth and Burke would put the weight of his body across the chest of the victim-asphyxiating them.  Burke and Hare would ply their chosen victim with drink before leading them away to kill them in the burking fashion. No one was safe and Burke and Hare generally preyed on the weak, vulnerable and lonely-even children.
Dr. Knox certainly knew what Burke and Hare were doing and even took part in covering up the murders. One of the victims, known as 'Daft Jamie', had deformed feet and was well known in the area. When Burke and Hare delivered Jamie's body to the doctor, Knox cut off Jamie's feet and face so that his cadaver was unrecognisable when he came to use it in a dissection for his students.
Dr.Knox was a flamboyant lecturer who wore a bright purple coat, had curly hair, one eye and pitted skin as a result of smallpox. He attracted many students to Edinburgh, at one point teaching 500 in one year. Dr. Knox would cut up about 80 bodies a year in order to attract high numbers of students, which meant he needed a steady supply. He also brought great wealth to the area-could this mean that people were willing to turn a blind eye to these murders? 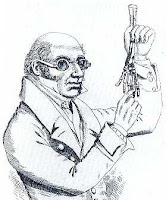 Within a few months, Burke and Hare had provided Knox with 16 bodies-netting the equivalent of £130,000 in today's money. It would be victim number 17 that saw the end to this horrendous string of murders. By the time victim number 17 met her fate, Burke had his own house, let's be honest he could afford it, and it was there that he murdered Mrs. Docherty. At the time, two of Burke's wife's relatives were staying at the house and it was them who found the body and alerted the police. By the time the police arrived at Burke's house, the body was gone. The police were tipped off though-they were told to check Dr.Knox's office and they would find the body of the recently deceased victim. In November 1828 Burke, Hare, Margaret Hare and Burke's wife were arrested.. In exchange for immunity for himself and his wife, Hare agreed to testify against Burke and Burke wrote a written confession in which he stated his wife and Knox were innocent. So, in the end, only Burke was convicted of the murder.
The notoriety of the case made it Britain's 'trial of the decade'-all of Scotland's top lawyers were involved, and on the first day of the trial (24th December 1828) the 'court was packed to suffocation'. Burke was found guilty and one month after the conviction he was hanged by the neck until he was dead. The 'honour' of dissecting Burke's body was given to Dr. Monroe. A number of items were made of out Burke's skin and his skeleton is still used in the same medical school where he was dissected today.
I will be eagerly awaiting the release of the new feature film, Burke and Hare, to see how accurate the portrayal of the story is!!
Posted by TammiMagee at 02:40 1 comment:

The Battle of Ruddy Balaclava!

The other day I thought it would be a good idea to get my A level students to use historical sources in a slightly different way to what they're used to. So using the events of the Charge of the Light Brigade I gave my students sources related to particular people involved in the charge.
So one pair were given sources about Lord Lucan's actions, another pair about Lord Cardigan's and so on. The idea was that the students would use the sources to write a blog of that particular person's perspective on the charge-as if it was happening in real time (I told them to imagine that everyone there had Blackberry phones!) I had originally wanted them to use Twitter for this as I have seen similar things done using that particular medium-but unfortunately, Twitter is blocked by our school server, so we used blogspot instead. Despite this, the finished blogs were absolutely fab! I told my year 12 class that the one I thought was the best (although it was tough decision to make, as they were all so good), would be featured on my blog. So, the 'winning' blog was the one done by Michael who had to blog about Lord Raglan's perspective of the Charge. Please go over to Michael's blog and take a look at what he's written and if you see what you like, let him know by leaving a comment! Thank you.
Posted by TammiMagee at 12:54 4 comments: