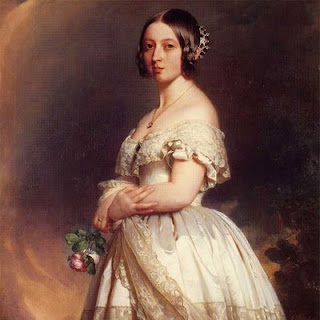 Queen Victoria was never meant to be Queen of Britain. Born to the Duke of Kent on 24th May 1819 she was the fourth in line to the throne. Needless to say, Victoria's birth did not send shock waves through the country. The most that was expected of her was to make a good marriage.
However, Victoria was born during a time when the Royal Family were experiencing a succession crisis. George III's five surviving daughters and seven sons were middle aged and had had only one legitimate heir between them by 1817. The legitimate heir was Princess Charlotte-the whole country were pinning all their hopes on her producing a male heir. When Princess Charlotte and her hubby, Prince Leopold of Saxe-Coburg, were expecting a child the country breathed a sigh of relief. But after an extremely long and difficult labour, Charlotte produced a still born baby boy. If this was not enough bad luck for the Royal family, within hours of the birth Princess Charlotte contracted a fever and died. A wave of panic came over the Royal family and the country because of the lack of an heir.
The panic started what can only be described as a competition between the Dukes to see who could produce an heir first. The Duke of Kent (below) married Prince Leopold's sister, Victoire, and started the race to produce an heir. 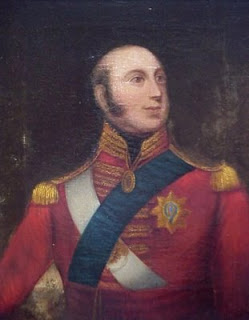 Victoire soon became pregnant and the Duke of Kent was elated-he had won the race. The Prince Regent was not elated-he was so unhappy that he was determined to put a dampener on things.
The Prince Regent only allowed a handful of people to attend the christening of the new member of the royal family. The Duke and Duchess had planned to name their daughter Georgiana Charlotte Augusta Alexandrina Victoria. However, the Prince Regent, who was one of the baby's godfathers, refused to allow his own name (George) or his late daughter's name (Charlotte Augusta) to be bestowed upon this possible future queen. He announced that the baby would be named Alexandrina after her other godfather, Russian Tsar Alexander I. When Edward suggested Elizabeth as a second name, the Prince Regent shook his head and declared, "Give her the mother's name also then". Victoria was christened Alexandrina Victoria, although her mother preferred to call her Victoria.
At aged 8 months, Victoria's father died after taking to his bed with a chill. This left Victoria and her mother in a dire situation. They had little money and needed help. Prince Leopold persuaded the Prince Regent to allow Victoria and her mother to live in Kensington Palace. He begrudgingly obliged. The day Victoria and the Duchess moved into Kensington Palace King George III died-the Prince Regent was crowned George IV. Victoria was now third in line to the throne. 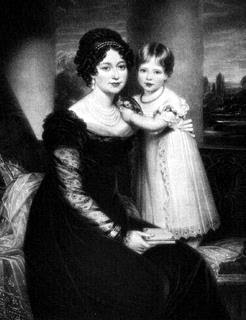 Victoria's mother and her close friend, Sir John Conroy, were convinced that Victoria would become Queen and so made sure that they conditioned Victoria for that result. Everything Victoria did was monitored-she was seldom left alone at any time-even all of her food was tasted before she ate anything.
As Victoria grew her Uncles remained childless. The Duke of Clarence came close to producing an heir but the two daughters he had both died in infancy. When Victoria was 11 King George IV died and the 64-year-old Duke of Clarence became King William IV. Victoria was now heir to the throne of Britain. Victoria's mother began to flaunt Victoria around all over the country-her daughter was sure to be Queen!
The politicians of the day thought that the name Victoria to be unsuited for a Queen and tried to get her mother to change Victoria's name to something more suitable, like Elizabeth or Charlotte. After some thought, the Duchess refused-the thought of her daughter bearing her name as Queen was far too appealing to change. Just imagine if the Duchess had agreed to the name change-we would have no great 'Victorian Age' but something else entirely! It just would not be the same would it?
Posted by TammiMagee at 09:25

Email ThisBlogThis!Share to TwitterShare to FacebookShare to Pinterest
Labels: Duchess of Kent, Duke of Kent, Queen Victorian, the Victorian Age

My father named a pregnant stray Queen Victoria and we adopted her lookalike daughter. It seems fitting since the real queen and her mother needed a home after the future queen's father died.

They faced a succession crises back in the pre-Victorian Era. In 1998 - 2006 the West faced a policy crisis which just perhaps Blondie, the queen's daughter helped resolve.