War Tunnels Definitely Worth a Visit. 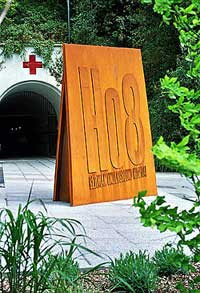 I have already mentioned about my recent visit to Jersey and the book I purchased while I was there. Now I would like to tell you all about one of the many things I enjoyed about Jersey during my visit.
Before my trip to Jersey took place I knew that I wanted to visit the 'Jersey War Tunnels', otherwise known as 'Hohlgangsanlage 8. German Underground Hospital', because I had been told how good it was by two friends who had visited Jersey earlier in the year. My friends told me that before you go into the tunnels you are given an Identity Card of a person that lived in occupied Jersey, and at the end you discover the story about your person and whether they lived or died. I was, of course, very excited about this as the stories of individuals are what really make History the most interesting subject!

The war tunnels, which were set to be an underground hospital built by the occupying Germans during the Second World War but were never used for this purpose, play host to a permanent exhibit called 'Captive Island'. This exhibit details the story of Jersey and of its people between the years 1940 and 1945, the years that Jersey was occupied by the Germans.

The exhibit details every part of the occupation and has many artefacts on show that further enrich the experience of discovering how life was under Nazi rule.

As you make the journey through the underground tunnels there is much to see, do, and read, which makes the exhibit well worth the £10 you pay to see it.

The story of the occupation is an extremely interesting one and in some parts it can be rather amusing, for example, one of the first things the Germans did on July 1st 1940, when they landed on the island, was order that all clocks were to be put forward an hour in keeping with Central European Time. This act caused much confusion the next day when when the islanders forgot! However, much of the story about the occupied island was heartbreaking in the fact that most the people's civil liberties were taken from them by the Nazis. A curfew was placed on the islanders, there was a ban on the sale spirits, all wirelesses had to be handed in, and all British-born islanders were deported to Germany.

Occupied Jersey also saw some organised resistance in the form of the V-for-Victory campaign that began in 1941. This campaign was encouraged by the BBC and saw islanders painting the V-for-British-Victory signs on doors, gateposts, and walls. Some people even built their own wirelesses in order to listen to the British news for updates on how the Allies were doing. These illicit wirelesses were crystal radios or 'cat's whisker' sets. The punishment for being caught taking part in any form of resistance was harsh with people being sent to 'work education' camps in Germany where many people died.

This exhibit is well worth a visit, so next time you're in Jersey make sure you check it out!