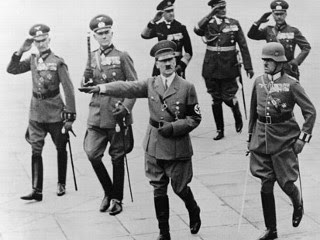 To finance their expensive war and domination campaign, the Nazis looted gold and other valuable possessions from any country they invaded, including Belgium and the Netherlands. The Nazis would even loot private citizens of countries of their valuables, such as jewellery and art.
There are many theories as to where the Nazis deposited the stolen booty; the obvious location has been deemed to be the Swiss National Bank, as they have one of the most secure and secretive banking systems in the world. The Swiss banks have very strict privacy laws on all accounts; this means that under no circumstances can the banks share any information with third parties, unless it is requested by a Swiss judge's subpoena. This then has made it incredibly difficult for any government to determine who or which country owns any of the Nazi gold that the SNB may have. If the SNB did take in gold and valuables on behalf of the Nazi regime then they most definitely have made a very tidy sum from it!

Should the Swiss banks be forced to return any Nazi gold they may have? Let me know what you think!
Posted by TammiMagee at 13:45