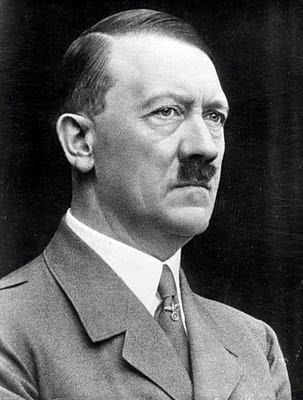 Adolf Hitler had been accepted into the Academy of Fine Arts in Vienna? Would he still have developed his intolerable hatred of Jews? Would he have ever become interested in Politics and go on to be Chancellor of Germany? Would the dreadful atrocities of the Holocaust have happened?
Adolf Hitler was born in Austria on 20th April 1889, but his family moved to Passau, Germany when Adolf was three, which led Hitler to later identify more with Germany than his native Austria. As a young boy, Adolf was a normal child who played 'cowboys and Indians', a game that first sparked his fascination with war and being a soldier. But in 1900, Hitler's younger brother, Edward died after contracting measles. After this, Hitler is said to have become sullen, morose and detached, often arguing with teachers at school and his strict Father at home.  Adolf and his Father, Alois, would often clash, mainly over Hitler's desire to attend the Classical High School rather than the Technical School, which is where his Father wanted him to go so that Adolf could become an Austrian Customs Official.  Adolf and Alois could never see eye to eye and Adolf was regularly beaten by his Father. In order to show his resentment towards his Dad, a keen lover of all things Austrian, Hitler became obsessed with German Nationalism, using the German greeting 'Heil' and singing the German national anthem rather than the Austrian one.
Despite the obvious tension between Adolf and Alois, when his father suddenly died in 1903 Hitler became very disruptive at school and was asked to leave. Hitler enrolled at a different school but was expelled in his second year after an incident with his school certificate.  At a loss of what to do Hitler travelled to Vienna in 1905, living a bohemian life, in order to gain acceptance into the Academy of Fine Arts. 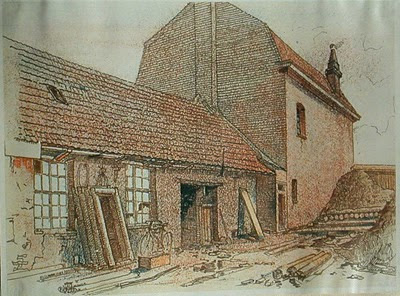 Hitler drew scenes around Vienna and lived off an Orphan's pension and support from his beloved Mother. Hitler made his first attempt at gaining entry into the art school in 1907 but was told that his skill as a painter was not good enough. Above is one of Hitler's drawings-to the untrained eye it looks rather skilfully done.
In December 1907, Hitler's Mother, Klara, who Adolf adored, died of breast cancer. A court ordered that Hitler give his share of the Orphan's pension he received to his sister, Paula. With no money Hitler struggled as a painter in Vienna-he would copy post cards and sell them but this made him very little. In 1908, Hitler failed a second time to be accepted into art school-with no money left Hitler had no choice but to live in a shelter for the homeless (incidentally, a group of 'undesirables' that Hitler would later persecute).
It was in Vienna that Hitler, as he describes in Mein Kampf, first began hating Jews. Where Hitler had grown up he had only ever seen 'Europeanised' Jews but in Vienna he saw Orthodox Jews-Hitler didn't like what he saw-he even went as far as questioning whether these deeply religious people could possibly be German.
Hitler's way out of homelessness came in 1914-the outbreak of the First World War. Hitler was desperate to fight for a Bavarian regiment, and so petitioned King Ludwig III of Bavaria for permission to serve-this was granted.  By all accounts Hitler was a rather good soldier-a runner on the front line he was twice decorated for bravery and ended his army career as the British equivalent of a Lance Corporal. Hitler even suffered temporary blindness as a result of a mustard gas attack and had to spend a few weeks in a military hospital. Some Historians argue that it is during this period that Hitler first had the unforgivable idea of exterminating Jews.
Hitler was a firm lover of Germany and his service during the Great War only cemented this further. So when the armistice was signed in November 1918 and Germany admitted defeat, Hitler was devastated and couldn't understand why Germany had surrendered when they still held enemy territory.  Further humiliation came with the signing of the Treaty of Versailles in 1919-terms of the treaty saw Germany take full blame for outbreak of war in 1914, a massive reduction in Germany's standing army, demilitarisation of the Rhineland, and a massive debt, or reparations, that surmounted to an amount that was unrealistic to expect Germany to pay.  Hitler became obsessed with getting revenge for the treaty, which he saw as the cause of many of Germany's problems after the war, that of course and the Jews.  Hitler saw Germany go from a great nation before the war to a struggling country where unemployment was sky high and people were miserable-forced to be humiliated first by defeat and then by the conditions of Versailles.  All the while, as Hitler saw it, German people were starving and poor, whereas Jewish people seemed to be getting on fine-Hitler's hatred of the Jews was gradually getting deeper and deeper.
After the war, Hitler became actively involved in politics, shaping his political ideas in the German Workers Party (the name would later be changed to the infamous name of National Socialist German Workers Party), where the leaders were impressed by his oratory skills.  Hitler was eventually elected leader of this party in 1921. The party was elected to power in Germany with Hitler becoming Chancellor of Germany in 1933. The rest as they say, is History. A very dark and disgusting period of history to say the least.
Could it be that if Hitler had been accepted into art school that he would not have gone on to be Chancellor of Germany? Could he have ended up just another humble painter? It certainly wouldn't have prevented his hatred of Jews as this first started when he was in Vienna. But could it have provided Hitler with a different path? Even if he had have gained entry into art school the First World War still came along. Hitler was Germany obsessed-he certainly would have still wanted to fight for Germany in 1914. It is during his time as a soldier that his love with Germany became a sort of intense 'love affair', and where he experienced the cutting humiliation of defeat and the terms of the Treaty of Versailles. Maybe then we could argue that if the First World War had never have happened that Hitler would not have experienced such humiliation, and therefore, have not had the need to vent his frustration with the world in a hot bed of politics, leading to his domination of a party full of anti-Semites.
Let me know what you think on this subject.
Please note-this post is not designed in any way to offend anyone and is certainly not absolving Hitler's behaviour in any way. What Ifs in history are just things I like to contemplate.
Posted by TammiMagee at 07:36

It's a very big if. Makes you wonder as well, what seemingly random sequences of events lead to tragedy every day. Or tragedy being avoided. What if's are so frustrating because they are so difficult to pin down.

I completely agree. What If's must exist in everything! Just finding the interesting ones is tricky. Thanks for the comment!

Oh my gosh! I had the same thoughts when I first learned about Hitler's artist aspirations being dashed. Did being a jilted artist alter history? Being an artist myself I know how personal rejection can be, each creation is a piece of you. A lot of creative types have sensitive psyches. How shattering was this to him? If he had been successful would he have quietly gone into the art history books? Or would his success have given him the platform he needed to voice his ideas? Would art have taken his energies in a different direction? The sick side of this is how valuable his art is today, he would probably have a great laugh over that!

I think that he would not be as pessimist and so reactionary! if he was accepted, perhaps!

I bet if he'd been excepted into art school he just would've gotten kicked out. Maybe if his brother hadn't died, or his father didn't beat him. Not that I'm absolving him in anyway. Just because bad things happen to you, that's no excuse for doing bad things to someone else.