Anatomy and its murky past...

History is intriguing, scandalous and hugely entertaining-it can also be dark, mysterious and a little macabre. The picture above is from a series being shown on British TV called 'History Cold Case'-every week a crack team of forensic scientists shed light on our past by examining the dead. This weeks show saw the investigation of a mummified body of a young boy-maybe around 7 or 8 years of age.  The team wanted to find out the history of the boy and under what circumstance he came to be used as a anatomical specimen. The team think the boy was preserved to be used as a display or as a tool to help train anatomists- as they delve deeper into the history of anatomy, in particular how bodies came to be acquired, they reveal a murky past. 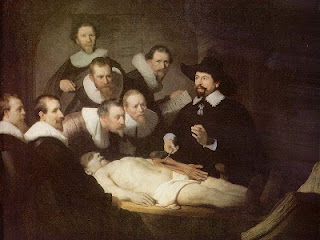 After observing the remains the team leader, Professor Sue Black, notices that, although the size of the head and the fact that he has most of his adult teeth point to him being around 8 years old, his arms and legs look to be quite short. After a full x-ray of the remains Professor Black notes that the leg bones have a series of faint white lines going through them-this she says could mean that either the boy had a succession of diseases, or that he had been malnourished-resulting in stunted growth.  From this Professor Black deduces that the boy could have possibly been living at a poor house for some time, and that upon his death he was handed over to a school of anatomy under the Anatomy Act of 1832-which allowed the dissection of the destitute. However, when one of the team take a photograph of the mummified boy to a specialist at the Huntarian Museum in London he thinks the remains could possibly date from the 17th or early 18th century, due to the way the boy has been posed.  Shockingly, this reveals that the body of the boy may have been obtained before the Anatomy Act of 1832, which means he was taken illegally. Could somebody have stolen this poor boy's body or could there be a more sinister explanation?
The team do an in-depth analysis of the flame red resin that was used to preserve the arteries of the boy to try to get a more accurate date of when the boy was preserved. The results showed that the resin found in the boys vessels was a close match to the resin used by famed surgeon and anatomist John Hunter, which therefore, dates the mummified boy to late 18th century or early 19th century. The team theorise that the boy could have been preserved by John Hunter himself, or at least one of his pupils, and also come to the conclusion that the boy was probably from London, which is where John Hunter was based. 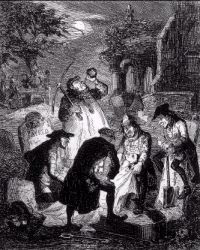 It looks then like the body of the boy was obtained illegally-as a result of this the team go on a fact finding mission to discover just how rife body snatching was in the 18th century. After a trip to the archives it transpires, after reading the diary of a resurrectionist (a name given to body snatchers), that grave robbers used to have watchers to tell them about newly buried corpses, which they would then dig up and steal in order to sell them at a high price to hospitals. The investigation leads to Saint Sepulchre's Church on Giltspur Street, North London, which was at the centre of a very lucrative trade in fresh corpses. The area was surrounded by hospitals teeming with medical students-the demand was so high for bodies that the local council became increasingly worried about the numbers 'going missing', that they raised the money to have a watch house constructed on the boundary of St. Sepulchre's graveyard in 1791.  However, a lot of the men who ran the watch houses were corrupt and for a bribe would turn a blind eye, or in some cases help the resurrectionists. So, the illegal trading of bodies remained a lucrative business until 1832. The reason the body trade was so lucrative near Sepulchres was because of the nearby St Bartholomew's Hospital-porters from the hospital would leave hampers out at night for the body snatchers to use to transport the dead bodies to a nearby public house, that acted as a safe house for the resurrectionists, where the cadavers would be laid out ready for surgeons and anatomists to pick from.
The business of selling bodies was such a good money maker that some people even kidnapped and murdered children in order to sell their bodies to the highest bidder.  One such prolific grave robber was John Bishop, who was actually tried and convicted of murdering a 14 year old boy for the purposes of selling him to a surgeon. All together Bishop admitted to stealing between 500 and 1000 corpses and of murdering 3 people to sell their bodies, although that number could be higher. Could the mummified boy have been the victim of such a heinous crime? The trial of John Bishop and his accomplices in 1831 highlighted the need to do something about these terrible goings on-and so the following year the Anatomy Act was passed.
What the team concluded about the boy: He was around 8 years old, was well nourished but suffered periods of illness and was dissected and preserved in London before the anatomy act of 1832-either stolen from his grave or murdered to furnish the demands of the anatomists.
Let me know what you think on this subject!
Posted by TammiMagee at 04:28

hi, you have nice blog.. u can view also mine..http://akoniwares.blogspot.com

What a cool place you have got here I LOVE history and anything that has anything to do with it. Loved the post very interesting I had no idea about the body thief's, that is so so scary and really creepy but it is the kind of things I like to read. I added you to my blog roll and after this comment i am going to be a follower. I will come back and check it out.

Thank you so much for your comment-it's always nice to hear that your efforts are appreciated! Hope to see you on here often!

Wow. I just stumbled across your blog, and really loved your post. Honestly, though, I doubt that Bishop and those like him murdered to sell the bodies; I'm more inclined to believe that just like sociopaths today, they murdered because they liked to murder, and selling the bodies was a lucrative and convenient way to hide the evidence. :(