It is hard not to have some sort of opinion on Truman's decision to drop the Atomic bomb on Japan in 1945. The question is; what opinion should we have? What opinion is the PC one? Does what you think depend on whether you're an American or Japanese?
I have always felt immense sympathy for the residents of Hiroshima and Nagasaki-but then I think about the 'what ifs?' What if Truman had decided not to use the A-Bomb and had gone for full scale invasion instead?-it would have meant the death of an estimated 1/4 million to 1 million American troops. Would that have been the more humane alternative? I'm not quite sure. After all, the Japanese did attack the US first and, three months after the end of war in Europe, Japan was still carrying on the fight in the Pacific. The war needed to be put to an end and the Japanese were given ample time to surrender. But, the Japanese had always had a militaristic attitude; after all, they were fighting for an Emperor who they believed was a God on earth-they were fighting for their rights, their beliefs, and themselves. Even school children were being trained with bamboo spears to kill any enemy they may come across in an invasion of their land.
The atomic bomb was a new and immensely powerful weapon with a destructive force equivalent to a 2,000-bomber raid. One bomb of this capability had never been tested on humans before-just in the deserts of New Mexico. A select number of people knew what the bomb could do in terms of destruction but they were not fully sure of the after effects it would have on humans. 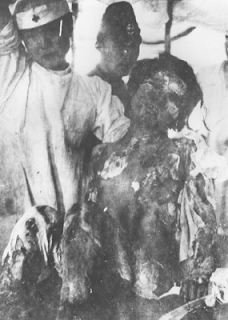 "In the first billionth of a second of the bomb impacting the temperature reaches 60 million degrees centigrade, 10,000 times hotter than the sun's surface. Within the first 3 seconds, thousands of people are incinerated, carbonised into charred smoking bundles. Birds ignite in mid-air. Steel-framed buildings liquefy like wax...Hundreds of radioactive isotopes spill out of the fireball [that followed], penetrating flesh and bone...Perhaps 80,000 people died in those first seconds after the blast. Thousands more would die later from burns and radiation poisoning".
It is the awful after effects of the bomb, like radiation sickness, that makes me think whether dropping the bomb was the right decision or not-I guess it's hard for me to have a worthy opinion on this with me being neither American nor Japanese.

But I would like to know what you all think about this topic...

I think we have to consider whether it is ever right to do something objectively evil in order to achieve a good. Deliberately destroying innocent civilians certainly seems objectively wrong (and all the more so when the weapons used are so catastrophically destructive). Does the end justify the means? In order to preserve the lives of one's own side, one's own troops, is one justified in abandoning these moral considerations? I know it was a very desperate situation for the Americans, but I cannot agree with the measures they resorted to here. After all, shouldn't the point of war (at least a just one) be not only to defend oneself from wrongful attack, and to restore peace, but also to restore a just peace? Taking moral shortcuts (even if understandable ones under the desperate circumstances) would seem to detract from this goal and mar this result.

Of course, someone might say that the inhabitants were not really innocent as the whole country was swept up into the war effort. But I think, one doesn't know in individual cases how they would have viewed matters, and one ought to be (in my view) "innocent until proven guilty." In any case, most were probably just ordinary people caught up in a tragic situation, under a strange regime.

The bombing saved millions of Japanese lives, leaving aside the lives of Americans, Australians, Brits, etc- It is likely an invasion would have brought out in the Japanese military the attitude that they would prefer every citizen of Japan to die before surrender.

That is probably true, mel ulm, yet I still do not think the bombing was justified. If people are determined to destroy themselves by putting up a futile fight, out of some misguided sense of honor, that is their responsibility. But if you (I mean, of course, speaking in the abstract, not you personally) deliberately destroy innocent lives, it becomes your responsibility and I think it is better not to have this guilt.

We can play what-if's for years to come. And we have. Unfortunately the people ~the real people who know the answers to these questions~ are not the ones in office today. We will make the same mistakes over and over and over again in many different ways.

I recommend reading the book by Kamila Shamsie, "Burnt Shadows" for just one look at how it is to be on the other side, and AN INNOCENT VICTIM. Don't tell me that children are not innocents.

There are arguments on each side here. Most people who served with the Allies agree with the decision.
My father certainly did.

My mother said after visiting Japan and seeing the museums that one day the Japanese would want revenge. It doesn't look like that's true, however. Let's hope not.

There is a theory that the bombs would never have been dropped on Caucasians but I am not sure about that.

It is a difficult decision. I wouldn't have liked to be President Truman.

What makes me a little disgusted about the a-bomb is that the Americans seriously considered dropping a-bombs again in both Korea and Vietnam. Eisenhower wouldn't even contemplate dropping another one on Asians but Westmoreland was very keen to use tactical nuclear weapons in Vietnam.

Hi
I enjoyed reading your blog and wondering if you were interested in adding mine to your blog roll ("More 'Histatic' Blogs") www.todayinah.co.uk ("Today in Alternate History") which I would reciprocate by adding Histatic to my own blog roll
Sincerely
Steve althistorian@gmail.com

I am American. I agree with Matterhorn.

excuse the very late response-just came on your response to my remarks-from you "That is probably true, mel ulm, yet I still do not think the bombing was justified. If people are determined to destroy themselves by putting up a futile fight, out of some misguided sense of honor, that is their responsibility"-with this perhaps I agree but do they have the right to impose this decision on others who have made no such determination-the Japanese people were the biggest victims of their leaders