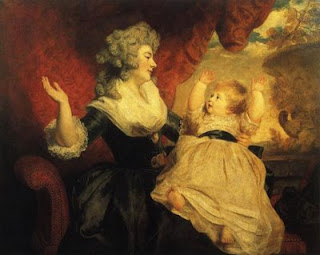 To Georgiana's disappointment the Duke was not different in private to what he was in public-he remained cold and unemotional. This was the cause of much distress to Georgiana who was in a sense the exact opposite to the Duke-she was passionate, fun-loving and sociable. Georgiana could only hope that affection, and possibly love, would come later.
It was because of Georgiana's many attributes that she soon became a popular public figure and leader of the Ton-a group of high society who inspired fashion, trends and tabloid headlines. Anything Georgiana did was the 'done' thing and anything Georgiana wore became the 'it' item of the season. She was a tabloid sensation-reporters followed her wherever she went. You could say that modern celebrity journalism started with her.
It was after Georgiana became an integral part of fashionable society that she started to gamble-initially just to get out of Devonshire House, which was boring and monotonous to her. But Georgiana's gambling would become a problem, especially in later years when creditors were pressing Georgiana to pay them back. For many years Georgiana was able to keep the creditors at bay with loans from friends, including from the Prince of Wales, but there would come a day when Georgiana had to confess all to the Duke as the debts mounted.
By 1782 Georgiana had still not produced an heir; so the Duke and the Duchess decided to travel to Bath so that Georgiana could take the waters there, with the hope of improving her fertility. It was in Bath that Georgiana met Lady Elizabeth Foster, known as Bess, a separated mother of two who was estranged from her husband, and therefore did not see her sons for 14 years. Georgiana and Bess soon became extremely close and ended up being life long friends. Bess was a main stay in Georgiana's life up until Georgiana's death in 1806, even when Georgiana discovered that Bess and the Duke were having an affair. The affair would serve as an advantage to Georgiana however, as Bess was able to smooth over conflict and disagreement between the Duke and the Duchess. Bess also provided Georgiana with the love and affection she craved from her husband, and so Georgiana would not hear bad things said about Bess and ignored all her mother's calls for Georgiana to send Bess away. Although Bess did truly love and care for Georgiana she was always jealous of her friends popularity and status-Bess' commitment to the Devonshires served her well in the end when she became the second Duchess of Devonshire in 1809.

Come back for the third installment when we discover what Georgiana was like as a mother and about her involvement in politics!
Posted by TammiMagee at 06:22

Have you seen the film "The Duchess"? I would be curious what you think of it... One of my earliest memories is being at Chatsworth when I was three. It's definitely worth a visit.

Thanks for your comment. I have seen the film-I thought the film was ok-Kiera's protrayal of Georgiana was good but overall I was disappointed with it. It showed nothing of Harriet or Georgiana's gambling problem and didn't really get across Georgiana's and Bess' relationship well. What did you think of it?

I read about her in a book called The Napoleon of Crime in which a Moriary-like character actually steals the famous painting of her and keeps in under her bed. True!My blogs about lots of stuff - cool historical riddles as well. Please pay me a visit. I have become a follower of yours.